Why is this study necessary?

Constructed in 1939, the bridges along the Ocean Drive Causeway are over 75 years old and have exceeded their service life.  Age, deterioration, and increased traffic volume and loads (weight of vehicles) are some of the reasons why these bridges are in need of major rehabilitation or replacement.  Additionally, Ocean Drive sits below the 100-year flood elevation and is therefore vulnerable to inundation. As an important evacuation route, it is important that Ocean Drive remain passable during storm events.

What is the existing condition of the bridges?

The bridges were built in 1939 and are beyond their serviceable life at over 75 years old. The bridges require routine inspection every two years with an interim inspection every 12 months due to the low inventory rating. The bridges are currently safe to travel on, however, without significant on-going structural maintenance, the bridges may require a more restrictive load posting (further restrictions on the type and weight of vehicles allowed to use the bridge) due to the continued deterioration.  The table below summarizes the existing conditions of the three bridges:

What does “Functionally Obsolete” mean?

Functionally Obsolete is a status used to describe a bridge that no longer meets current design standards. This status is typical of older bridges.

What does “Structurally Deficient” mean?

Structurally Deficient is a status used to describe a bridge that has a deck, superstructure, substructure rated in “poor” condition.

What is an LCD Study?

A Local Concept Development (LCD) Study is the first phase of the Local Project Delivery Process for transportation improvements.  During this phase a Purpose and Need Statement will be developed focusing on the need to address structural and operational deficiencies of the bridge. The LCD Phase also includes data collection, coordination with local municipal officials, community stakeholders, and Federal and State permitting agencies; the development of a reasonable number of sensible and practical conceptual alternatives; and the recommendation of a Preliminary Preferred Alternative (PPA).

What is the schedule for the Ocean Drive LCD Study?

Major project milestones and corresponding time frames are listed below. The project is expected to be completed in the Spring of 2019. Public outreach is ongoing and will be conducted throughout the life of the project.

How will the project benefit pedestrians and bicyclists?

As part of the Study, the project team is asking for input from the local officials and community stakeholders to understand what pedestrian and bicycle mobility and access is needed.  As part of the LCD Study phase, when developing the project Purpose and Need for improvements, all modes of transportation are taken into consideration regarding the bridge, including: pedestrians, cyclists, transit, and vehicular uses.

Have the project’s improvements been decided?

No, the reason for this Study is to identify what are the current transportation issues and needs regarding the Ocean Drive Causeway, and to develop the Purpose and Need for bridge improvements.  The project is currently in the Local Concept Development (LCD) phase to identify the needs, develop conceptual alternatives, and recommend a Preliminary Preferred Alternative (PPA) for bridge improvements. A Resolution of Support from the local officials is required. The Project Team will also coordinate with regulatory agencies before advancing the project to design and construction.  Cape May County and cooperating agencies will continue to seek community input on the design and proposed transportation improvements during the LCD phase and future phases of the project.

How much will it cost and who will pay for it?

The cost of implementing the Preliminary Preferred Alternative (PPA) will be estimated as part of the Local Concept Development (LCD) Study, and will qualify to be funded with Federal dollars if it meets the Federal requirements.

How will the project affect the environment?

At this stage in the project, the environmental screening has been prepared and reviewed by the New Jersey Department of Transportation (NJDOT) Bureau of Environmental Program Resources (BEPR).  Once conceptual alternatives are developed, each alternative will be evaluated for its potential impacts to the environment, which will be a consideration in the recommendation of the Preliminary Preferred Alternative (PPA).

Per the Federal Highway Administration (FHWA), a fatal flaw is a defect in a scenario, solution set, or alternative that makes implementation of such strategy impossible or highly undesirable.

Will construction impact the Ocean Drive Causeway? Will there be detours? Will there be lane closures? How will pedestrian access be impacted? How much noise will be created by this project?

At this time the PPA for the bridge improvements has not been identified, therefore the impacts are not known.  As the study progresses and more is known, the impacts and mitigation measures for the surrounding area will be identified.

Abutment – Supporting structure that holds up or provides foundation for the bridge. (See illustration bellow.)

Deck – The Deck is the surface of the bridge that vehicles ride on. It may or may not be covered with a wear surface such as asphalt. The bridge deck is often steel-reinforced concrete and is supported by the Superstructure. (See illustration below.)

Efflorescence – The migration of salt to the surface of a porous material, where it forms a coating. 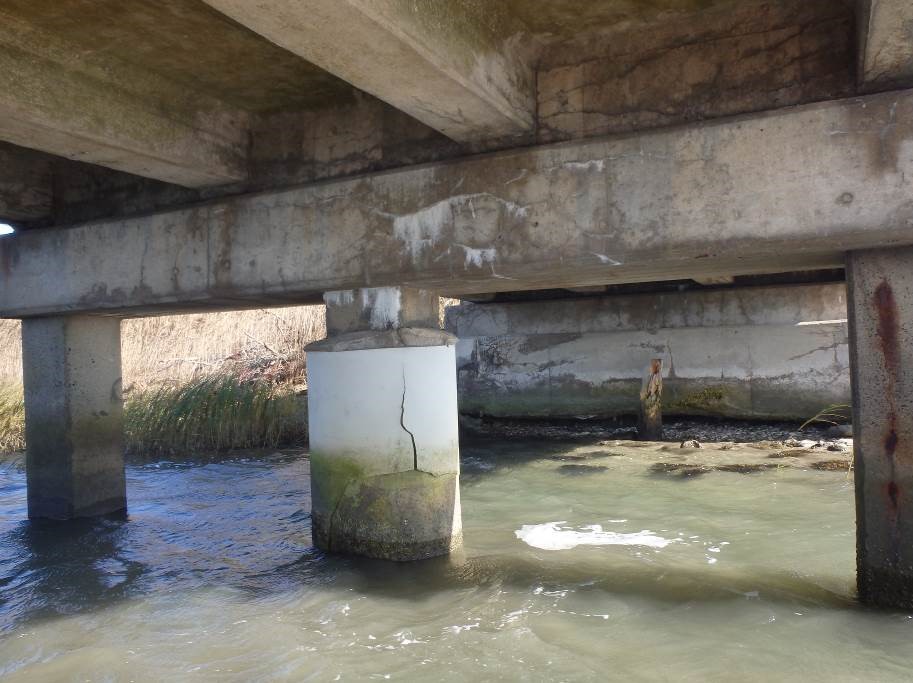 Pier – A pier is an intermediate support for the adjacent ends of two bridge spans. (See illustration below.)

Scour – The removal of sediment such as sand and gravel from around bridge abutments or piers. Scour, caused by swiftly moving water, can scoop out scour holes, compromising the integrity of a structure. 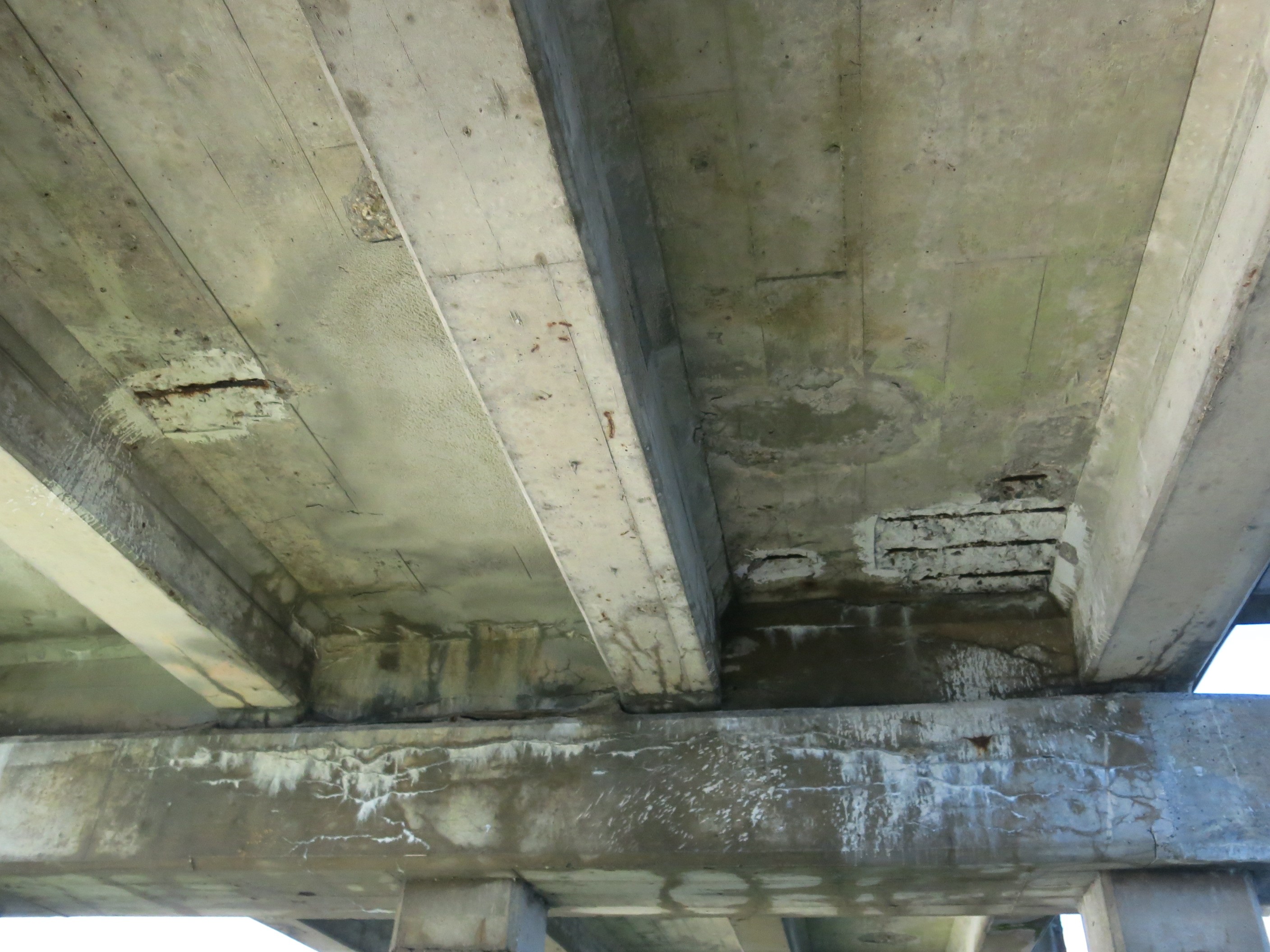 Span – The structure that rests on the supports of a structure or the distance between two supports holding up a structure.

Substructure – The bridge substructure is essentially the bridge’s foundation supporting the superstructure. This includes abutments and piers.

Superstructure – The bridge superstructure includes the structural elements that support the bridge deck. These may include steel beams, a concrete frame or culvert, steel cables and a floorbeam system as used in a suspension bridge, or a steel truss.

What if I have other questions or concerns about the project?

Cape May County and the cooperating agencies of SJTPO and NJDOT, encourages community members to voice their concerns and contribute suggestions to the Project Team.  To provide input, attend one of the public meetings or contact: